09 NovRunning the “would be” New York City Marathon…for relief on Staten Island.

Last Friday, November  2nd, I arrived in New York City ready to support and cheer on my sister-n-law who was trained and ready to run the 2012 ING New York City Marathon, the biggest international marathon in existence.  While in a cab headed to our hotel, we learned the marathon had been cancelled due to the devastation of Super Storm Sandy and the escalating marathon controversy (misguided beliefs that the marathon would take away supplies and relief support from storm victims).  Fortunately, we had discussed the possibility of this happening the day before and so wewere able to quickly change the focus of our trip.  She was a model of mental toughness, letting go of 9 months of training in a matter of hours is not easy, but she did it. 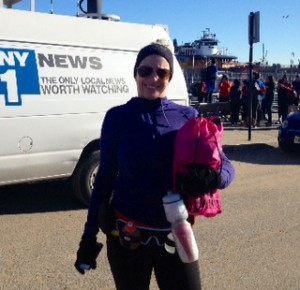 Our “would be” marathoner, Jennifer Westhoff

Our energy shifted to figuring how we could help the city with relief efforts. Through social media (the power of Twitter is AWESOME!), I was able to connect with people I know in the sports community who were tweeting about the “New York Runners in Support of Staten Island.” Proving once again, the world is a very small place, the NY Runners in Support of SI was being organized by Dr. Jordan Metzler a Sports Medicine Doc from New York City.  I had just spent a bit of time with Dr. Metzler in Tucson at the espnW conference last month.  He led an “Iron Strength” workout at the conference.  It was tough! I couldn’t walk properly for 4 days following that workout!  This was the relief effort to join.  The plan was to meet Sunday morning, when the marathon was scheduled to start, at the Staten Island Ferry.  Dressed in orange, armed with an adventurous attitude and needed survival items in hand our mission was to literally run the items to shelters, homes and lend a hand wherever needed.  After all, this was a group of highly trained athletes who were prepared to run!

We went to the local pharmacy late Saturday night and bought toothbrushes, flashlights, baby wipes, batteries and gift cards and non-perishable food items, packed them up and showed up ready to run Sunday morning. 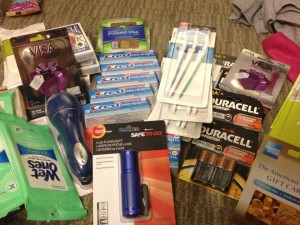 In less than 48 hours about 1300 athletes rallied to support a very worthy cause. Groups were organized by mileage.  We compromised on a 6-8 mile group, jumped on a ferry and once we arrived on Staten Island we took off running…with 15lb. bags in hand.   We started on our route, which as it turns out, was mostly up hill. Did I mention I’m not a runner?? 😯  Fortunately, it was a beautifully clear, crisp day. We, now a group of about fifteen runners, were headed to higher ground to one of the main shelters, located at a middle school. We were stopped a few times by very emotional residents who shared their gratitude for our willingness to help.  It was an extraordinary expression of appreciation which in my experience, you can only get through serving others. 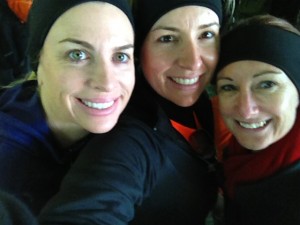 Ready to run!!!  Jennifer, Me and Cynthia.

After nearly 7 miles (up hill!) through a variety of neighborhoods, cemeteries, downed trees and power lines, we arrived.  This is where reality set in.  Many people were now calling this school, ‘home.’  Security was tight, FEMA representatives, mental health care givers and SPCA were all on hand to help.  Kids, blissfully unaware of the “big picture” were jumping rope as parents were trying to figure out what’s next.   Volunteers were hard at work organizing supplies and all of us who suddenly descended on them.  We stayed and helped manage donations, spoke with volunteers and victims.

Being mindful of the victims needing some sense of privacy and space we finished up the work that was needed and then promptly left the shelter and began the trek (downhill!!) back to the ferry.   Realizing that we donated the power bars that we brought for ourselves 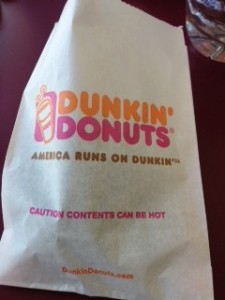 (our only food source for the day) we decided to make a pit stop at Dunkin’ Donuts.  I was very humored by Dunkin’s slogan that reads, “America Runs on Dunkin.”  On this Sunday, we were literally running on Dunkin’.  😀

Feeling a great sense of pride and accomplishment (this was my longest run ever!!) we made it back to the ferry, sat and relaxed as we passed by the Statue of Liberty in route to Manhattan.  We will never forget that day.

So many others did incredibly inspirational work as well, making a 15-mile trip to the storm ravaged beaches.  Here is a link to the Facebook page which chronicles a lot of the work completed by the group on “would be” marathon Sunday.

The work continues, donations are still needed, especially as the North East braces for another storm.

So often athletes get a bad rap in the media for poor behavior.   It’s my hope the world can see what athletes are really made of…true leaders, inspirational, willing to set aside their own agendas to help others and not afraid to get their hands dirty. 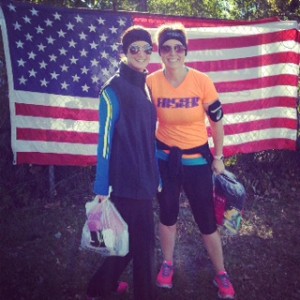 Having an American moment around mile 3.   😀