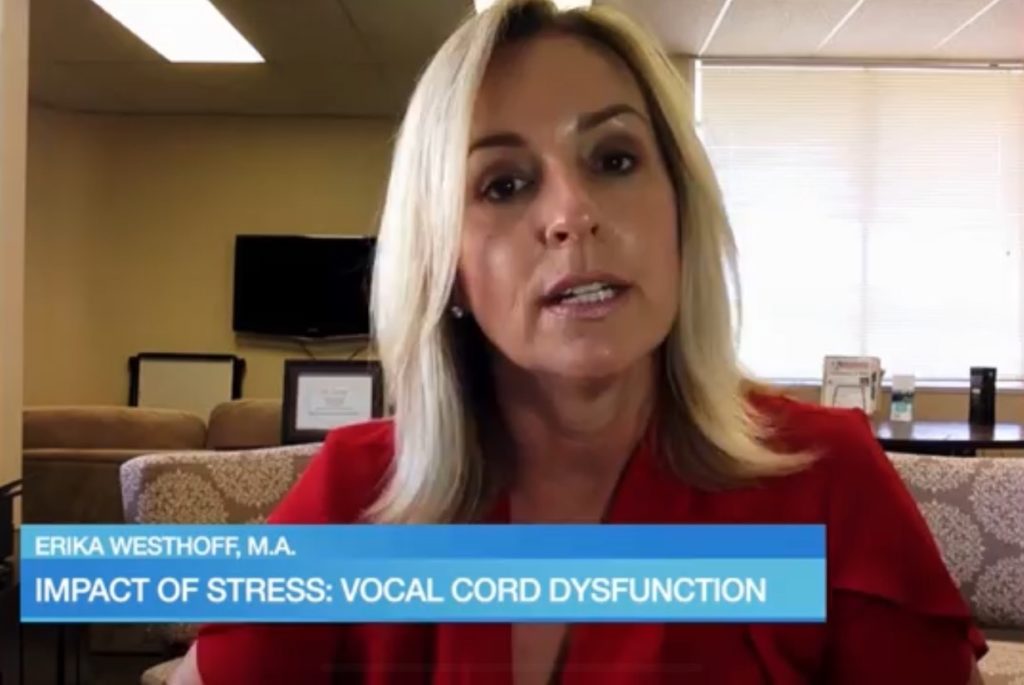 I’ve been a mental skills coach for 20 years now, and there’s no doubt in my mind that stress plays a much bigger part in the lives of young athletes today than it ever has before.

The effects of stress are showing up in very serious ways in the minds and bodies of these talented young men and women, with Vocal Cord Dysfunction being one of the most detrimental.

What Is Vocal Cord Dysfunction?

Vocal Cord Dysfunction (VCD) can be a terrifying experience for a young athlete. While at full effort, the body can become over-stimulated from physical exertion, mental “chatter”, and environmental stress (such as the chlorine in the pool, poor air quality, etc.) The body becomes overwhelmed, and tries to shut itself down by closing the vocal cords, not allowing air to move in and out of the lungs and forcing the athlete to stop in their tracks.

VCD is currently being studied in clinics across the country, but it’s common knowledge that one of the big factors that cause it is stress, specifically in Type-A personality individuals. These athletes tend to be very talented and hardworking, and often push themselves both in sports and in the classroom. There are several other variables that come into play, but these types of athletes tend to be the most prone to suffering from VCD.

Recently, I was able to work with an athlete named Rick, who was excelling on his high school cross country and track teams. This freshman from the Midwest was very good at what he did, but during the summer before his sophomore year, something started to go very wrong.

He started to feel his throat tighten as he ran. Eventually, it felt like his air passage had completely closed, and he had to stop in the middle of a race or tough training runs. Strangely enough, once he stopped, he was able to catch his breath and pick up the pace again. After this happened on more than one occasion, he became anxious, and pulled back on his efforts due to the fear that he might not be able to breathe again, the worry that he may have to stop running, and the stress of watching his times slowly and steadily increasing.

Rick and his mom did some homework, and were able to find a VCD clinic that gave a clear diagnosis and worked on valuable breathing techniques. Both of these are a must to help treat VCD.

Next, the clinic referred Rick to me. We got straight to work, teaching Rick how to manage his stress and avoid VCD episodes altogether. We reviewed the mental training fundamentals – those same skills that I teach athletes to add to their training toolbox and get that competitive edge they want. I put extra emphasis on relaxation and stress management skills, such as progressive relaxation, meditation, breathing, imagery, and self-talk strategies. I also really wanted to make sure that Rick had a solid plan for how to integrate these skills into his pre-race routines.

As with most athletes who suffer from VCD, Rick was one of those athletes who needed a good, strong sense of control over what stressed him out, and how he responded to that stress. It must be that Type-A personality! Once this control was established, Rick was able to start pushing himself during his runs again. Cross country season was the perfect experimental time for him to really nail down his race prep and management. As the season progressed, he was able to focus more on strategy and pushing himself as hard as he could, which is something he’s really good at.

Going into the post-season, Rick was running some of his best times ever. He wound up finishing among the top 15 in his entire state…as a sophomore. Pretty good! Naturally, Rick’s confidence is now sky-high, and he can’t wait for the start of track season.

While there is no cure for VCD, it is possible to control its symptoms. To do so, you need to have three very important components in place:

With all three pieces of the puzzle in place, the success rate for athletes with VCD is excellent.